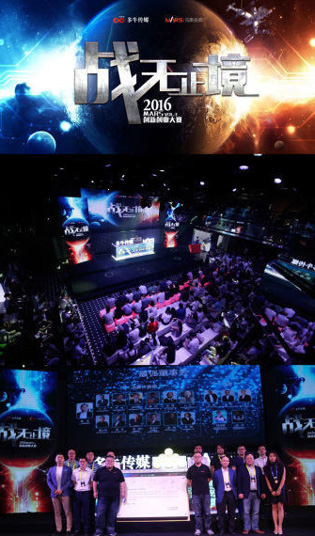 Beijing Infinitas Interactive Media Co., Ltd. (NEEQ: 835998, “Infinitas Interactive Media”) has announced the official launch of its 2016 MARS Innovation and Venture Contest (“MARS”) on August 25. The global innovation and entrepreneurial teams from seed stage to growth stage can register for the contest through the official channel (mars.marstmt.com) or partner channels. After an initial round of judjing, qualified participants will have the chance to enter the preliminary round and compete for a spot in the semi-final and final.

The event will last for 3 months and is open to all entrepreneurs. Entrants will be provided with promotion, training, technology, financial, legal and other support services. The teams in the final will receive professional polishing, enrollment in a mentoring program with well-known entrepreneurs, a full range of media promotion and other resources. They will face the scrutiny of a prestigious panel composed by 13 top investors and entrepreneurs.

Launched in 2012, the MARS Innovation and Venture Contest aims to select outstanding entrepreneurial teams and help them achieve capital validation and market success by providing them with the most needed business analysis, industry relations, promotional capability, fundraising assistance and other resources. Over the previous three competitions, more than 2,000 teams from nearly 50 cities and over 100 professional investors from 80 well-known investment institutions have participated. The events have given birth to star enterprises, including ChunyuDoctor, 3Glasses, Fotoplace, Caiqr, DaZhangFang and Sensors Data. The accumulated funds raised by finalists have been over RMB2.5 billion.

The MARS contest has become the most influential entrepreneurship competition in multiple dimensions (scale, involved investment, support, professional ability, industry sectors, and participating project quantity), establishing a circulated platform for entrepreneur selection, hatching and display. 2016 MARS will show a higher level due to the experience of the previous three competitions.

A Strong Lineup of Rich Resources

The cooperating agencies this year are the strongest ever. By establishing a cooperation system composing of the organizer, co-sponsors and strategic partners, a MARS strategic alliance has been formed that includes more than 100 investment institutions, 100 commercial institutions, 100 entrepreneurs and investors, and 100 media agencies, providing the outstanding entrepreneurs with broad and rich business resources.

Each team in the MARS final will be assisted by a dedicated mentor. The mentors include, in no particular order, Jiang Nan (CEO of Beijing Infinitas Interactive Media Co., Ltd.), Meng Fan (Founder of Black Butterfly Capital and Partner of RootsCap), Rao Huigang (Co-founder of Zhaogang.com and Partner of Pangmao VC), Wang Qiule (Partner of MainTrend Capital) and Zhang Hua (Deputy General Manager of Beijing Office of Shenzhen Capital Group Co., Ltd.).

Given the development trend of science and technology innovation, the MARS contest has adapted by setting up sub-competitions in four fields, concerning investor interest, entrepreneur focus and market segments, so as to improve the professional requirements of entrepreneurs.

For high-tech and overseas-student entrepreneurs, CAS Innovation and Investment Co., Ltd., the co-organizer of MARS, co-sponsored the First Sino-British Science and Technology Innovation and Entrepreneurship Competition with the UK branch of the Western Returned Scholars Association. They will cooperate with MARS, sharing project resources and recommending qualified projects.

In response to the development of the media industry, MARS 2016 will feature an upgrade to its highly recommended promotion power. In this year’s competition, a multi-dimensional promotion matrix composing of Internet, mobile, outdoor bulletin boards, TV, broadcasting live, video, newspapers and magazines, and radio has been formed to carry out multi-perspective exposure promotion for all participants.

The total number of official cooperating media is currently more than 100, and it is expected that the total global media outlets involved in reporting on MARS 2016 and interviewing the entrepreneurial teams will be over 20,000. It is estimated that during the competition period more than 8 million people will be exposed to the various promotional channels every day. The accumulated covered person-time will be more than 200 million. Total coverage time is up to 86 days, and the value of advertisement is over RMB80 million.

MARS has also designed a bunch of promotional activities. Sha Baoliang, a famous Chinese pop singer, has been invited to be the entrepreneurial public ambassador and campaign for all the entrepreneurial teams; he sings the contest theme song, “Companion”, which was created by renowned musician Liu Boyan. The song has been released on the Internet and has ranked at the top position of the major music charts.

At 6:00 AM, August 22 U.S. Eastern time (6:00 PM, August 22 Beijing time), Infinitas Interactive Media and 12 outstanding entrepreneurial teams from previous MARS finals collectively lit up the big screen at Times Square in New York, USA. This is the first collective appearance of Chinese entrepreneurs in Times Square, New York. The slogan “China Dream, Entrepreneur Dream” displayed at the end of the showcase. After the final, Infinitas Interactive Media will light up Times Square with the finalists of the year again.

MARS 2016 has extensive cooperation with all kinds of service agencies and has invited dozens of business service entities to participate in the support services. MARS has cooperated with more than a dozen business incubators and entrepreneurial cafes and they will provide MARS venture projects with promotion, roadshow and other types of brand service, and offer preferential settlement policies, business logic analysis and other assistance.

Dozens of law firms and consulting institutions have cooperated with MARS, providing the entrepreneurs with legal, human resource, financial, governmental policy consulting and other help and training. In addition, QingCloud, DIDI, BusOnline and other brand enterprises will also provide the entrepreneurs with cloud computing, travel coupons and various of resources. It is estimated that the total value of the service resources provided by the various agencies will be more than RMB10 million.

Marc Mcilhone is ChineseBrains' Editor - sourcing news and features content and overseeing the work of the site’s contributors. Marc’s work is informed by his technical background in architecture having worked for some of the UK’s leading practices on projects within the education, healthcare and housing sectors. Marc has a particular interest in how innovators are creating sustainable solutions that have a positive impact on people’s everyday lives. Please email press releases and news to: editor@chinesebrains.com
Previous Commvault and Huawei Extend Partnership with New Joint Lab for Development of Data Backup, Recovery, Archive and Cloud Solutions
Next Yingli to Launch New UL-Certified PV Module Series in the U.S.