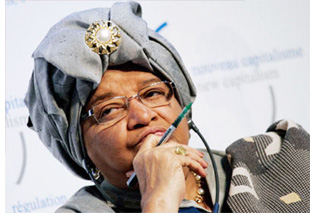 The people’s Republic of China lead by the Director General of the Department of International Cooperation, Ministry of Public Security Mr. Duan Daqi ordered a Special Chinese delegation to visit Liberia in order to heighten the bilateral cooperation between China and Liberia.

On Tuesday July 12th, 2016 President of Liberia, Ellen Johnson Sirleaf greeted the Special Chinese delegation to Liberia and showed her gratitude towards the People’s Republic of China for their over-all support in helping Liberia strengthen as a country and their on-going support in its rebuilding process. The delegation is there to give hand in maintaining and improving peace and security across Liberia. President Sirleaf told the Chinese delegation, “We are pleased with your visit to Liberia and believe that it is very timely.”

The president praised the long-established relationship between her country and the People’s Republic of China and gave kind remarks on the contributions they have made particularly towards the development of the Liberia National Police. Sirleaf urged the Chinese to continue to invest and extend their investments towards the Police as it takes over security from the United Nations Mission in Liberia, (UNMIL).

The Special Chinese delegation couldn’t have come at a better time for Liberia as the LNP face some obstacles ahead in the discharge of its duties. The leader of Liberia lauded the Chinese delegations plan to provide specialized training for the police in fighting crimes and terrorism and personally thanked the current Chinese Ambassador to Liberia, Zhang Yue for his administration and guidance in Liberia’s recovery process.

Mr. Daqi also reflected upon the improvements in Liberia and the challenges they still faced going forward. Mr. Daqi claimed that he had every confidence in the Liberian security and the Liberia National Police Force to uphold security and law and order during the Post-UNML period but emphasized the importance that the Police Force gained further training in anti-terrorism. It was announced that there are plans underway for a team of Chinese trainers whom specialize in ant-terrorism to go to a unit in Liberia and work with the Libirian police, as well as an extended invitation for two senior police officers to take part in a peacekeeping training program, scheduled to take place in China, August 2016.

In Mr. Duan Daqi’s final remarks he announced that there are plans to train 20 Senior LNP officers at a Chinese Police Academy in November 2016 in order to support the capacity building initiative of the Liberia Natinoal Police. “We are prepared to assist in building the capacity of the Liberia National Police, in the aftermath of the drawdown of the United Nations Mission in Liberia to include the supply of uniforms and other equipment.”

Inspector General of the Liberia National Police, Col C. Clarence Massaquoi gave thanks to the Mr. Duan Daqi and the delegation for the visit to Liberia and stressed his appreciation for the presence at the Headquarter; Massaquiou emphasized that with this support from the Chinese delegation and numerous training programs the LNP will be able to perform excellently.

Maisey White is a special intern reporting on the impact of Chinese technology investment in Africa. Maisey's particular interest is how Chinese investment can advance the development of education in Africa and how new innovations can contribute to Africa's ICT for development.
Previous The president of China and President of the Republic of Congo meet to extend bilateral relations and diversify economy
Next The Benefits of Having a Serviced Office with Website Support