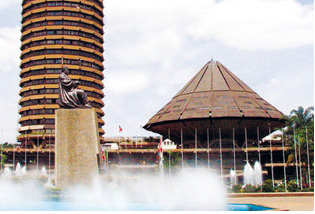 According to the Chinese ambassador to Kenya Liu Xianfa this is only going to be increased; “China will continue partnering with Kenya, helping it in building more industries and fulfil modernized products”

It was stated by Liu Xianfa that China is now Kenya’s largest source of foreign direct investment and second largest partner. Liu estimated that in 2013, China’s combined direct investment in Kenya reached US$474 million and by the end of the year rose to US$8.4 billion.

Director of Meeting Incentive Events (MIE) David Wang commented on the trade week expo stating, “We strongly believe that this event will provide an opportunity for Kenyan entrepreneurs to grow strong business partnerships with Chinese companies and benefit from the industrial capacity.” He added that a lot of Chinese companies are keen to expand their affairs into developing countries such as Kenya.

MIE International Director Gary Robinson also made some remarks on the growing trade between China and Kenya, identifying and supporting that China has become one of Kenya’s most substantial trading partners over the past decade he added that “This is because China produces goods that meet the needs of the local population, and that the trade fair will also provide an opportunity for Chinese firms to establish joint venture manufacturing units with Kenyan companies.”

Robinson said that “A lot of small and medium size companies are under pressure to source high quality goods at competitive prices and that china offers the most competitive price for most manufactured goods.”

Maisey White is a special intern reporting on the impact of Chinese technology investment in Africa. Maisey's particular interest is how Chinese investment can advance the development of education in Africa and how new innovations can contribute to Africa's ICT for development.
Previous Chinese built – WeChat set to target wallet technology in South Africa
Next Special Chinese Delegation work with President Sirleaf and the LNP to continue to re-build Liberia and ensure safety