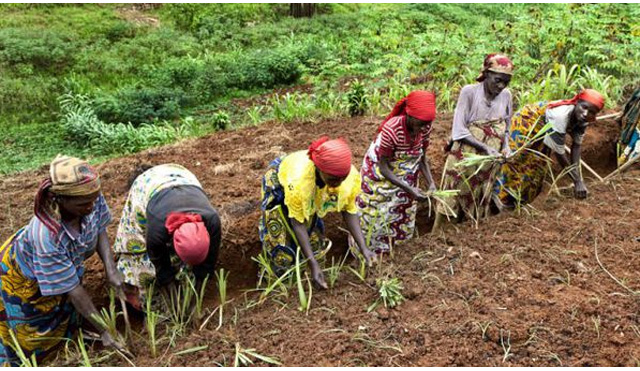 France is leading a worldwide push to increase the amount of carbon locked in soils through better farming practices.

Supporters of an initiative launched at the COP 21 summit say this would limit global warming by removing carbon from the atmosphere, while also increasing the range and amount of food farmers produce by improving soil fertility. This would particularly benefit developing countries, according to representatives of the 4 Pour 1000 initiative.
“It’s a bit of a scientific dream, but we have a lot of evidence that supports this dream.”

“It’s a bit of a scientific dream, but we have a lot of evidence that supports this dream,” Jean-Paul Moatti, the chief executive officer of the French Research Institute for Development, one of the organisations behind the plan, said yesterday on the sidelines of the talks in Paris, France.
Jean-Paul Moatti, French Research Institute for Development

Increasing carbon stocks in the top 40 centimetres of soil by four parts per 1,000 (0.4 per cent) each year would compensate for carbon emissions from human activity, the project description says, provided deforestation is halted.

To achieve this, the plan suggests five practices: not leaving the soil bare, to curb carbon losses from erosion; restoring degraded land; planting trees and growing legumes that increase levels of the plant nutrient nitrogen in the soil; feeding soil with manure; and conserving water at the base of plants to boost their growth.

Dennis Garrity, a dryland ambassador for the UN Convention to Combat Desertification, said the plan could transform agriculture in the same way that renewable energy advances help change energy systems.

Farmers are already trying to introduce new practices, said Edwin Castellanos, director of the centre of environmental studies at the Universidad del Valle in Guatemala. “The big challenge lies with small farmers” who lack the access to finance and technological support that big businesses have, he told the event.

In Guatemala, attempts to charge consumers a premium for coffee grown on more environmentally friendly fields has only had “limited success”, Castellanos explained. The problem is that farming must remain commercially competitive, he said.

The 4 Pour 1000 proposal consists of a voluntary action plan and research programme. The programme does not yet come with a budget or timeline, but Moatti told SciDev.Net he was confident it would secure funding from international sources such as the UN Framework Convention on Climate Change’s Green Climate Fund.

But a group of humanitarian and development NGOs called Coordination SUD have raised concerns about the type of funds that may be used to finance the initiative. It fears that without proper oversight, the use of private sector funds could lead to land grabbing.

Partners in 4 Pour 1000 include research organisations, the governments of Costa Rica, Ethiopia, Morocco and Uruguay, the World Bank and the UN Food and Agriculture Organization, as well as businesses and NGOs.

SciDev.Net is a not-for-profit organisation dedicated to providing reliable and authoritative information about science and technology for the developing world. Through our website www.scidev.net we give policymakers, researchers, the media and civil society information and a platform to explore how science and technology can reduce poverty, improve health and raise standards of living around the world. We also build developing countries’ capacity for communicating science and technology through our regional networks of committed individuals and organisations, practical guidance and specialist workshops. SciDev.Net’s vision is to achieve better-informed decisions by individuals and organisations in the developing world on science and technology related issues, and thus the better integration of scientific knowledge and technological innovation into policies, programmes and projects intended to achieve sustainable development at all levels of society.
Previous China’s Renewable Energy Sector Presents USD 2.2 Trillion Investment Opportunity to 2030
Next Trina Solar Successfully Connects Three Distributed Generation Projects Totaling 27 MW to the Grid in Suqian, Jiangsu Province