Zhuhai CTC Electronic: the Story behind the Riverside 3D Printer 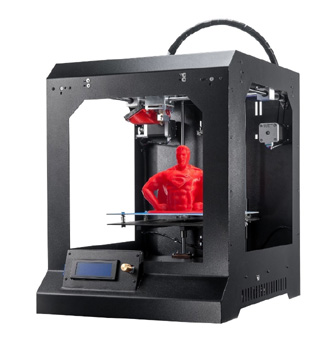 The Riverside SLA 3D Printer, a product recently rolled out by Zhuhai CTC Electronic Co., Ltd. is being regarded as the most compelling product across the desktop 3D printer sector in 2015. Despite the 0.1mm minimum layer thicknesses, the printer priced at US$1,480 has grabbed a lot of attention from the industry.

The sound and elegant look provided by the Riverside’s subdued silver and black colors reflects the increased stability and flexibility enabled by the concave metal pedestal specially designed by the manufacturer. As part of the background story that led to the design and launch of the Riverside, Zhuhai CTC Electronic PR Manager He Siyi explained that after rolling out a series of high precision SLA and DLP printers two years ago, including at least 10 varieties of printer generally available in the market at that time, the company found that these printers were not only pricey but also failed to offer a good experience for users, falling far short of the superior performance that was showcased in the commercials. As a result, the company decided to develop a new 3D printer called the Riverside.

Users found that the success rate of 3D printing stands at a mere 30 percent to 50 percent given the complexity of the printing process. A novice user may find that it takes more than a day to print even a modestly satisfying product.

Users of 3D printers dependent on resin adhesive pots found it unacceptable that they often had to replace the expensive resin adhesive pot after printing three to five of what were, in most cases, unsatisfying prototypes. They also found that the smoothness of the surface of the printed prototypes was not as good as vendors promised. Zhuhai CTC Electronic has already developed a reputation as a premier supplier of FDM 3D printers. The maker chose the name Riverside for its second series of SLA printers to differentiate it from its first group of SLA printers, the Bizer series. Zhuhai CTC Electronic named the new 3D printer after Riverside, a city in Southern California, in remembrance of the time when Vincent Yang, founder of the company, lived there in 2000.

The research and development that went into the Riverside printer was a time-consuming process with many starts and stops, resulting in five trial models. Product Manager Wei Chengjun explained that the development of a new 3D printer is a complex process that includes appearance and structure design, with the core and differentiating elements being the development of the lasers and galvanometers, the layout of the rear circuits and the research into the selection of the printing resins, all of which have a significant impact on the performance and reliability of the printer.

“It requires a clear idea to develop a 3D printer and also a clear understanding of the ultimate mission. Once you decide on a path, you need to make every effort possible to accomplish it using all resources available,” said Vincent Yang.

Development of the host computer software and printer firmware are at the heart of all projects. Wei added that, although the slice software is developed based on open source programs, the company’s eight-person software engineering team in Bangalore, India worked continuously for ten months going through four versions before coming up with a model they were satisfied with. At several junctures they came close to giving up out of frustration. As an example, they had gotten nowhere with the light path calculating results after a half year of hard work. To overcome the difficulties, Zhuhai CTC Electronic Vice President Tan Jianru led a team at a crucial moment to India, personally taking charge of the work in Bangalore and finally completed the first testable version after several 17 hour workdays at the peak of a very hot summer in South Asia.

The reason why Zhuhai CTC Electronic set up a software center in distant Bangalore, India was to maintain maximum efficiency of all R&D efforts that went into the Riverside. Reiterating what Wei said, 3D printing needs a perfect combination of both software and hardware while the absence of either one may lead to a final failure — it can’t possibly succeed without driving the resources advantages of both. “There are not many places in the world where the two resources can be well integrated. The hardware strength represented by China and the software strength represented by India is a good model for combining two strong suits,” said Wei.

The company went through many iterations for each software and hardware module as the Riverside was developed, with each iteration moving the project forward one step. Wei admitted that, despite rejecting the results of so many iterations and making improvements with each subsequent iteration, the printer hasn’t reached the standard of perfection even after considering the trade-offs between cost, efficiency and printing accuracy.

For example, to enhance ease of use, the company has sacrificed a bit on layer detail, with the Riverside capable of 0.1mm layer in thickness, instead of the 0.025 achieved with other SLA machines. In addition, the one-time printing prototyping rate relies heavily on the user’s abilities at debugging on the printing platform. Moreover, the physical properties of the current printing resin still leave something to be desired and remain subject to further and continued development efforts.

As for TechCrunch’s comment that Riverside’s resin basin and building platform as well as switch button are similar to Form 1, Mr. He explained that is probably due to the writer of the article not being very familiar with the history and current situation of 3D printers. He said the design of these components are not exclusive to Form 1 but are basic structural designs for any desktop SLA DLP equipment. We can find the same or similar structure and design on such printers as EnvisionTEC, Autodesk, EMBER and B9Creator, Mr. He added.

Marc Mcilhone is ChineseBrains' Editor - sourcing news and features content and overseeing the work of the site’s contributors. Marc’s work is informed by his technical background in architecture having worked for some of the UK’s leading practices on projects within the education, healthcare and housing sectors. Marc has a particular interest in how innovators are creating sustainable solutions that have a positive impact on people’s everyday lives. Please email press releases and news to: editor@chinesebrains.com
Previous DMM FX Australia 30% Initial Deposit Bonus Campaign & China UnionPay Funding Option
Next WuXi PharmaTech’s China-Based Small-Molecule Manufacturing Subsidiary, STA, Enters into Private Placement Agreement